After years of desperate longing, I have finally been to Cebu on a business trip. Though this wasn’t my first time to set foot on Lapu-lapu’s turf, it was the first time I actually had the chance to do what I had always wanted to do: go bead shopping!

While most of you call Cebu the Queen City of the South, I call it the Ultimate Beader’s Paradise. Being the export capital for wearables, Cebu has a wealth of export-quality beads and components that are hard to find in Manila. In short, it’s Bead Heaven.

Last week, armed with only a list of addresses I got from the internet and tidbits of information I gathered from friends, off to Cebu Marco and I went. I felt like an adventurous little devil, for neither of us has been to the city before (I only stayed inside the resort the first time I was there). Bahala na became sort of our motto. The whole thing felt very Amazing Race-ish. Haha!

After checking into the resort a few hours earlier than scheduled, we decided to head straight to one of the tourist spots for lunch. If bead shopping was the primary reason for the trip, food tripping was a close second. So off we went searching for authentic Cebuano fare: Sutukil. Though I knew what the coined word meant, I thought all along that Sutukil was the name of a famous restaurant, just like Gerry’s Grill or Razon’s. So there we were at the Mactan shrine, looking for the resto called Sutukil. It turned out to be a general term, like manukan or tapsilog-an. Geesh.

After a very filling meal of sinugbang tanigue, pork chop and calamares (forgot to take pics!), I browsed through the small stalls selling souvenirs and was delighted to find out that they were selling beads by the strand there too.

I don’t know what got into me though, because I only bought a few strands! I guess I was thinking that I could easily go back for more if I wanted to. After all, we would be in Cebu for three days. It turned out to be a stupid decision – we never did go back to Mactan Shrine because we ran out of time.

Day 2
We'd decided the day before that the second day would be spent doing the nitty-gritty of Cebu bead shopping. So despite the lure of the sea, we left the resort at around 10am (because I woke up late, as usual) and headed for Mandaue City. Marco was determined to skimp on transpo expenses so that we could buy more beads. So we roughed it out and took the jeep instead of hiring a cab.

Next thing I know, we were lost in the middle of busy Mandaue. It was completely my fault of course. Stupid me kept pointing at a blank spot on the map (we got this WOW Philippines map at the airport for free). “Jan tayo pupunta,” pointing to a huge area on the map. Eheh.

After finally finding the supplier in Mandaue, we headed to SM for the much-awaited part of the trip: getting a taste of authentic lechon Cebu. C&T in front of SM was one of the popular lechonans, so that’s where we had lunch. The price was unbelievable – we spent less than P300 for half a kilo of lechon, 3 servings of rice, and softdrinks. We weren’t particularly impressed with the lechon though. There was something amiss with the flavor. Tsktsk. But the black sambo (cocoa and milk jell-o) saved the day for me. Panalo. (Not according to Marco though.)

Next stop was Sto. Nino Church, where there were supposedly some nice beads for sale. Another Amazing Race-ish blooper there, this time kagagawan ni Marco. We got off the jeep biyaheng Mandaue-Sto. Nino when we saw what appeared to be a huge church in downtown cebu.

So there we were taking pictures of the beautiful church. When we went inside, I thought to myself, “Yey, walang masyadong tao.” We started looking around and took pictures of the interiors. We were standing near the entrance, far from the altar, and the place was a bit dim. So when I couldn’t see the Sto. Nino, I blamed my poor eyesight. I can be as blind as a bat when the place is dark. So I approached the tanod sitting in one of the pews (of course I made sure he wasn’t praying muna, I’m not a complete ditz), “Saan po yung Sto. Nino jan?”

Duh. Turned out we were in the wrong church. We got off the jeep one block early and ended up in Cebu’s Cathedral. After getting directions from the tanod, we walked to another church a block away, which, unlike the cathedral, was teeming with tourists and pilgrims. This was the right one for sure.

The Basilica Minore del Sto. Nino, as its name suggests, is quite small. But the altar was overwhelming, what with the many statues of various saints propped up in front. It gave me the creeps.

I have this thing against statues. I am terrified of rebultos – even the tiniest ones, or even those of Jesus Christ. Especially those. But that deserves another blog entry.

Back to the bead shopping. After a quick peek inside the church, I excitedly searched for the small stalls selling beads. In my mind, I was about to come upon a vast bead market, where I could find the most wonderful shell, coco, and wood beads.

But I was disappointed to find out that there were only a few stalls around the church – and they didn’t have any loose beads to sell. All they had were ready-made trinkets which didn’t catch my fancy. Perhaps it was the wrong season to be bead shopping in Cebu after all. I did see one stall selling beads, but they weren’t what I was expecting to find. I still ended up buying four plastic bags full of beads– they were pretty, but not exceptional. Not at all what I came to Cebu for.

Up next: what saved the day plus the trip back to Manila 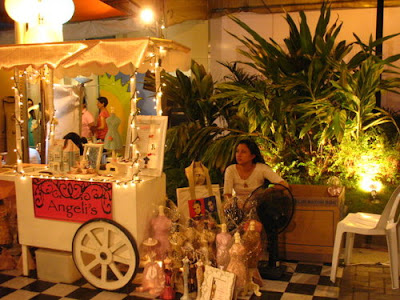